Behold, I have refined you, but not as silver; I have tried you in the furnace of affliction. - Isaiah 48:10
by Kerry Tittle

We are told that the Grace of Christ is more than enough to overcome the deepest hurt, the toughest trials and the darkest valleys.  However, we are skeptical when our efforts are ineffective and there is nothing left but to surrender it all and to trust Jesus completely.

I am a testimony to this glorious grace.  I have witnessed His stubborn pursuit of this prodigal heart. Here is my story.

April 27, 2014.  A day that would forever change me.  My daughters were showing me some lightning they had filmed on their phone.   Before I got the chance to see it, I watched in horror as forty-foot oak trees began to effortlessly lay down in our back yard. 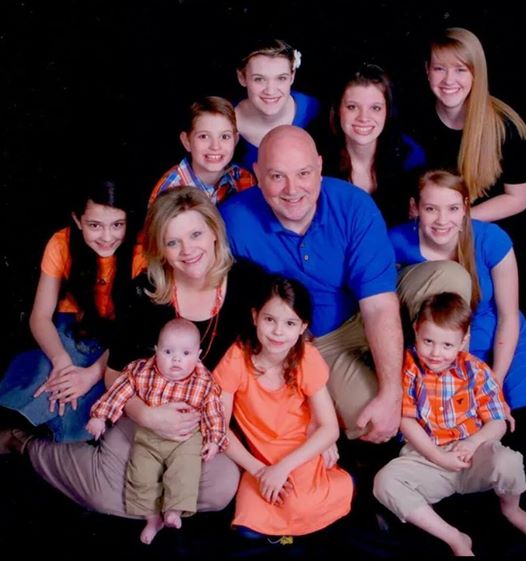 No one said a word.  We immediately sprang into action getting the children to safety under our stairwell.  Before my husband Rob, my daughters Tori and Rebekah or myself could get under the stairwell, our home took a direct hit from an EF4 tornado.

Using debris, I pulled myself to my feet and began to count children.  I didn’t get far when I saw the horrible truth before my eyes. My husband Rob, my daughter Tori and my daughter Rebekah had already been ushered into eternity. A small “no” escaped my throat.  I frantically began to look for my other children.

I found a deep hole that once contained the roots of a tree and placed children in it for protection from the weather.  Noah 9, Mollye, 6, Asa 4 and 6-month old Baby Joshua all looked at me with terror in their eyes.  My daughter Emily Kathryn 17 and Isabella 12 stood at the base of the hole.  My daughter Whitney 19 had seen lights and ran for help.

As I tried to collect my thoughts, I became increasingly aware that my children needed medical attention.  As I looked out across the long span of devastation, I knew there was no way help could reach us.  Emily Kathryn and I began to carry children and aimlessly began to walk for help.  Our bare feet were numb to the debris.  We found a neighbor who helped us get our children to his home.  His wife (a nurse) and other neighbors set up a make shift triage.  I watched powerlessly as they took baby Joshua’s diaper off and removed all the glass. I glanced across the room and saw Isabella laying on the ground with an apparent broken arm going in to shock. Emily Kathryn sat on the couch doing her best to console her other younger siblings.  It was the most helpless moment of my life.

It took several hours for help to arrive.   I had to make the decision of how to divide up the children.  I begged them not to airlift my baby without me.   It was so hard for me decide who to leave and who to go to the hospital with.  I couldn’t wrap my mind around what those little minds were processing.

As men helped me and my injured children through a mile or so of debris on an ATV, I could hear the droning of chainsaws, red and blue flashing lights and medical personnel yelling at each other.  It was dark – no electricity. The only light came from headlights of emergency vehicles.  All the chaos seemed to fade into the background as I numbly sat inside the ambulance with three of my children.  My mind was numb from shock.  I felt absolutely nothing.

The evening pressed into the early morning hours.  The hospitals and faces became a blur.

As I was being pushed in a wheel chair down corridor after corridor I kept my eyes fixed on the continuous passing white squares on the floor to avoid all the faces staring at me.

I was certain most of me died that day. I had lost my husband, two children, all I owned and even my identity.

I started out with all the strength and resolve to honor the Lord with my life during this trial.  I boldly declared my love for the Champion of my heart. But He knew my frame.  I was but dust and didn’t even know it.  When the shock wore off and reality dawned, a dark shadow cast over my soul. I tried to process the fact that my husband and daughters had entered in to eternal glory.  I tried to understand this new life God had called me to.  This fiery trial stretched beyond my limitations.

The once homeschool supermom of nine children, now lay humbled and broken at the throne of grace, quietly begging for help to endure the race.  My kingdom was crumbling and there was nothing I could do to stop it.  I sat in the ashes of my hopes and dreams and gave up any hope for strength to walk this road.  Any step forward seemed insurmountable.  It was clear that may heart and flesh had failed.

It was times like this that I wanted to avoid any sort of lifeform altogether.  I had heard every comparison story, every grief verse, been given the latest trendy “fix it” that you can shake up in water and heard countless pieces of counsel.   Yet, the heavy blanket of darkness would not lift. I could not have come up with a more hopeless situation.

I began to isolate myself from all the friendships I had known and the people I loved and trusted.  But while my doubting heart was frantically trying to figure it all out, the Lord quietly started His refining process.

The Lord began to show me minute pieces of His plan.  I witnessed baptisms whose lives were changed by the storm as well as tubs of letters from across the nation by families who had been impacted by our story.  He allowed me to be a vessel for a while than permitted me to be an audience peering into a small window.  But what impacted me the most was the spiritual eyes he had given my children.  Even though some struggled and wrestled with life, they were very aware of God working, even when they didn’t like it.  My younger kids all began a thirst for Truth.

One thing about trials: they expose who you are.  I would have told you that I was extremely firm in my faith and could not be shaken.  However, I had never been held to refining fires of trial.  When I was, I felt like I had no faith at all.

My biggest hurdle was not wanting to accept weakness.  This was lingering legalism that kept tripping me.  I felt I needed to act a certain way in my trial to be acceptable to God.  Grief and sadness were just unacceptable.  I was the supermom after all! I couldn’t be seen downcast or I would be dishonoring God.  Down deep I knew that was not biblical at all, but I continued to struggle.

As the trial wore on I was constantly wrestling with how long could I possible walk in this darkness?   How long would the hopelessness last?  How long would the prayers remain unanswered?  How in the world can I possibly explain what I am going through to anyone else if I don’t understand it myself?  I began to to run and hide from this God I couldn’t understand anymore.

About a year and a half later the strong woman crumbled.  I still kept up the façade for almost another year and then the word was out.  I was a mess.  My children were a mess.  Life was falling apart.

My futile efforts to flee God were no match for His stubborn love and grace.  He held my prodigal heart fast and never let go.  He protected me from myself more times than I can count.  As much as I was insistent about how for away He was, He never left me.  I was never forsaken.

Refined Family came about from journaling my journey through some of the darkest moments of my life and a desire to help others see Christ in their Trials.  Dear friends have come alongside me to make this site a reality and to share the Grace of Jesus. I pray that the things that the Lord has taught me can be an encouragement to you.

We will send you periodic updates to bring Grace in the Fire.