Kerry Tittle is a mother of 10 children and a 20+-year homeschool veteran. She is the founder of Refined Family. Her desire is to honor Christ while comforting others with the comfort she has received from the Lord.

A few years ago I was asked to tell my story at a Christian Counseling and Educational Foundation (CCEF) national conference in Chattanooga, Tennessee.

There was nothing unusual about this. I had told my story many times in front of many people. But this was different.

A man walked in the room and sat in front of me before I was to go up and speak. Adrenaline rushed. Heart sank. I was having a hard time focusing on the lady speaking who would be introducing me at any moment. Then I heard my name, a few quiet claps and I forced my gelatin legs to walk up to the podium. 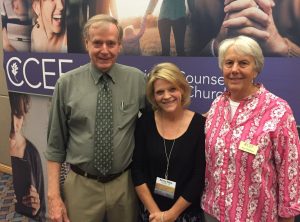 There in the front row sat David Powlison:

I made it through but not without the overwhelming feeling of insecurity and inability. When it was over and I began packing up my papers, he walked over and knelt down in front of me. He thanked me for sharing and began to offer wisdom and comfort. Afterwards a friend walked up to me and urgently questioned “What did he say?!” I gave him a blank look and said…”I have no idea!” As a humble and gentle man, I know he wouldn’t have wanted me to feel “star struck”, but I was because he represented the type of unwavering faith I have wanted. He was a kind of spiritual hero for me.

It was a moment that I cherish and will never forget (except for those undoubtedly wise words that were lost in my wonderment). Since then, a few books have come through the mail that he has graciously signed for me and brought great encouragement.

The email that announced his diagnosis with stage IV pancreatic cancer. What?!?! Months later came a follow up email with the dire prognosis of “a few months”.

I tried to wrap my mind around his tender thankfulness. He encouraged his readers:

How are we doing in light of such hard news? Grief and tears are close to the surface. But Scripture has been living and active, and full of love. The dots are connecting, and the intimate voice and presence of God in Psalm 121 has been a particularly significant companion. Our Shepherd watched over us, protects us, cares for us, and never dozes off. It’s so.

Since then I have watched a young mother and wife battle B-Cell Acute Lymphoblastic Leukemia. She received her crown May 6, 2019. One of her last posts was on April 27th which was the 5th anniversary of the day my daughters and husband were ushered into Glory. Her post reminded me:

“What a privilege to be able to speak to the Almighty God at any moment through prayer.”

I struggled when the wife of my pastor of 16 years found she had stage IV non-smoking lung cancer. Through her trial she also pointed others to Christ and consistently reaffirmed her hope in nothing else.

This week an emotional straw broke my spirit as I received news of Peter, a friend who I watched grow up in church and who since become pastor and an amazing husband to his wife April and father to his precious children. He announced April’s stage IV metastatic cancer diagnosis.

I’ve watched countless others contest this evil that accompanies the world’s brokenness. This week I learned that Mr. Powlison is now in hospice care. My longing for Heaven propagates as I helplessly watch the declining health of those who have most faithfully served the Lord.

When we are touched by watching those we love endure the unthinkable, we often turn the accusing finger at God. We may not do this outwardly, that doesn’t seem like the “Christian” thing to do, but the idea lurks in the shadows whether we are brave enough to voice it or not. “Why, would you do this?”

Maybe you have wondered. Maybe you have felt the sting of loss due to cancer. Maybe it was you who received the diagnosis. Some have been touched by cancer intimately and some from a distance.

Paul is reminding us that things are transient, even our health. As we waste away outwardly, our trials and suffering are preparing us for the Glory that we can’t even began to comprehend. If the soul-crushing pain is “light momentary affliction,” we can boldly hope in the joy that is set before us.

I don’t say this lightly and certainly not flippantly. There has been a battle raging for years in my own soul as I have fought to weighing my circumstances against the indescribable Glory the He has promised us. I certainly don’t always feel renewed. I have been beaten down with doubt and hopelessness more times than I care to admit. But these battles are not just purposeless events that God throws in our way. I have found that they have helped me grow in my dependence on Him and in skill with helping others just like those I have mentioned.

He has promised to never leave us or forsake us. And though it sometimes feels as if He has left us alone on a battlefield against an enemy that is far too strong, I have come to understand that this is just an illusion. The reality is that the battle is already won – our Champion has won it for us – and the contest we fight is no longer a life-or-death struggle for our souls. Our souls are held securely in His unbreakable grip.

What I have come to see is that the battlefield has been transformed into a training field. Our Captain has designed for us a training regimen that may feel like running the gauntlet, but His purposes are to strengthen us, to show us our weakness, and ultimately to make us like Jesus. The outcome is certain and secure – He has “predestined us to be conformed to the image of his Son.” (Rom 8:29b)  Though the training is exhausting and often pushes us beyond our perceived limits, we can rest knowing that our Trainer knows what He is doing and always stands nearby, though often out of sight, to keep us secure.

Christian, when it seems that the circumstances are closing in to overwhelm you, remember that your Savior has won the war. “No, in all these things we are more than conquerors through him who loved us.” (Rom 8:37) When hope is fleeting, lift your eyes and your voice to where your only help and hope come from.

And when the training is over and the race is run, know that the Captain of your soul will be waiting at the finish line to receive you, hold you and grant you “an inheritance that is imperishable, undefiled and unfading, kept in heaven for you who by God’s power are being guarded through faith for a salvation ready to be revealed in the last time.” (1 Pet 1:4-5)